Why a Breathable Baby Crib Mattress Should Also be Air Permeable

The definition of air permeable when it comes to fibers and fabric is the rate of airflow passing perpendicularly through a known area under a prescribed air pressure differential between two surfaces of a material.

In fact, the SafeSleep® Breathe-Through Crib Mattress created by Safe Sleep Technologies, (formerly Secure Beginnings) is the only breathable baby crib mattress that is also air permeable.   The SafeSleep® air permeable crib mattress is the only breathable baby crib mattress on the market today that is approved and endorsed by leading American Academy of Pediatric (AAP) physicians as addressing the multiple risk factors associated with infant sleep related deaths (SIDS/SUID).

CO2 RETENTION AND RISK OF REBREATHING

Prior to the publication of the AAP Task Force report, studies were available that clearly demonstrated that the risk of rebreathing of exhaled air (CO2) was lowest on breathable baby crib mattresses that are also air permeable  (Kemp 2000, Bar-Yishay 2011).   In addition, Dr. Moon was provided with test data from Intertek, a CPSC accredited and recommended lab, showing significantly low risk hazard of rebreathing of an air permeable crib mattress (lower than the firm fiber fill crib mattress with tight fitting sheet). The data demonstrates  air permeable crib mattress have significantly lower CO2 retention.  All three reports use similar test methods and have similar results.

While the studies of the three breathable baby crib mattresses that are also air permeable do not demonstrate a direct prevention of SIDS or suffocation, they rely on the hypothesis of rebreathing of CO2 as a potential contributor for these unexpected infant deaths.  Indeed no studies have substantiated the rebreathing hypothesis; however, this is the same hypothesis used by the AAP Task Force to support many of their recommendations including the following with quotes taken from the AAP Task Force report.

In addition, the Task Force recommends air permeable sides when bassinets are used. This recommendation is based on a retrospective review and analysis of infant deaths occurring in bassinets between June 1990 and November 2004 that were reported to the CPSC (Pike/Moon 2008). The authors identified at least six infants who were found unresponsive with their “face wedged against the side of the bassinet.” While there is no mention of any bassinets having air permeable sides in the study, the study authors (including R Moon who is the Chair of the  AAP Safe Sleep Task Force) recommends “a bassinet with vertical sides of air-permeable material, such as mesh, may be preferable to one with air-impermeable sides.”  The Task Force makes the recommendation for air permeable sides based on infants with face wedged against side of sleep environment but fails to recommend air permeable crib mattresses as being preferable to air impermeable crib mattresses to address infants face-straight- down on firm mattresses despite the continued report of such deaths.

Further the Task Force’s accompanying policy statement (AAP, 2011) recommends the following sleep surface: “Use a firm sleep surface—A firm crib mattress, covered by a fitted sheet, is the recommended sleeping surface to reduce the risk of SIDS and suffocation.”

“Cribs should meet safety standards of the CPSC, Juvenile Product Manufacturers Association, and the ASTM International (formerly the American Society for Testing and Materials), including those for slat spacing, snugly fitting and firm mattresses, and no drop sides.121”

This citation [121 US Consumer Product Safety Commission. Crib Safety Tips: Use Your Crib Safely. Washington, DC: US Consumer Product Safety Commission. CPSC document 5030] is a tip sheet written for parents and caregivers.  It is not a well-conducted case-control study, a systematic review, or a meta-analysis.  No other citation is provided.  The citations for this recommendation do not meet the Level A requirements.

Dr. James Kemp and colleagues were some of the first to study the potential for various sleep surfaces to prevent infant rebreathing (Kemp 2000).  They found that the firm mattress and four of the five surfaces designed to prevent rebreathing consistently allowed lethal rebreathing of CO2.  Only one product—a breathable baby crib mattress that is also air permeable—was able to maintain CO2 levels below this threshold.  The authors go on to say that “even firm crib mattresses could pose a rebreathing threat when vulnerable infants sleep prone.” They refer to studies showing that unaccustomed prone sleepers, including infants who are placed supine and roll prone have an increased risk of SIDS (L’Hoir 1998 and Mitchell EA 1999). These studies and others show nearly half of SIDS victims unaccustomed to prone sleep, were discovered in the face-straight-down position. Many of these infants were found on a firm crib mattress. Dr. Kemp’s data supports that if vulnerable infants were placed on an air permeable crib mattress or surface, they would experience less risk of rebreathing should they inadvertently roll prone.  There is no reference to breathable crib mattresses that are not air permeable reducing CO2 levels or reducing risks.

The AAP Task Force concurs with the CPSC that all loose bedding should be removed from the infants sleep environment.  The CPSC and the AAP issued an alert in 2001 warning parents and pediatricians of the “hidden hazard in babies’ cribs” of loose crib mattress sheets based on death reports of infants who suffocated or strangled when they became entangled in their crib mattress sheet. Two of the deaths involved fitted sheets.  The CPSC now requires that all crib mattress sheets carry a warning that the sheet should not be used if it doesn’t fit properly. CPSC pushed the sheet-making industry to improve the fit of sheets on crib mattresses. However deaths from sheet entanglement remain a risk for infants.  In the CDC’s multistate SUID Case Registry, the mechanism most frequently reported for possible and unexplained suffocation deaths was soft bedding which the registry defines as soft or loose bedding (Shapiro-Mendoza 2014). The loose bedding is not further defined but could be a blanket or fitted sheet that became loose.

Crib mattress manufacturers are not sheet manufacturers. The CPSC defines the industry requirements for mattress size based on ASTM standards. Their length and width requirements are consistent but their requirement for height is  six inches or less, making mattress sizes inconsistent.  Because there are no crib sheets made for a given mattress, the crib sheet remains a hazard. The design of the breathable crib mattress that is also air permeable eliminates this risk because no sheet or other bedding is used.  Breathable crib mattresses that are not air permeable, still use a sheet.

ROLE OF BACTERIA AND THE RISK OF FIBER FILL

A recent peer-reviewed article attempts to establish bacterial infection as having a major role in the pathophysiology of SIDS (Goldwater 2013).  The authors debunk the respiratory physiology model both as being unproven and inconsistent with the most plausible physiological events that take place during a SIDS death.

A recent study showed SIDS victims, especially those found prone, are more often colonized with S. aureus than living control subjects (Highet 2014).  Studies demonstrate colonization of traditional fiber filled crib mattresses with Staph aureus (Sherburn 2007) suggesting a source for acquiring these bacteria.  While no studies are available measuring colonization of breathable baby crib mattresses that are also air permeable, the surface is designed to be removed and laundered.  The SafeSleep® by Safe Sleep Technologies, recommends regular cleaning of the surface in a conventional washer and dryer.  Breathable baby crib mattresses that are not air permeable have fiber or other fills that can become contaminated.

Based on the bacterial infection hypothesis, it stands to reason the AAP Safe Sleep Task Force should consider recommending regular washing of infant sleep surfaces and removal of fillers from crib mattresses to reduce exposure to these pathogens.

After a long evidentiary process, the 2016 Safe Sleep Technical report now recognizes the safety advantages of breathable crib mattresses that are also air permeable crib in reducing the risk of unexpected suffocation/entanglement and other hazards that may be associated with SIDS.

The AAP does not recommend the use of breathable crib mattresses that are not also air permeable to reduce the risk of SIDS and other infant sleep related deaths. 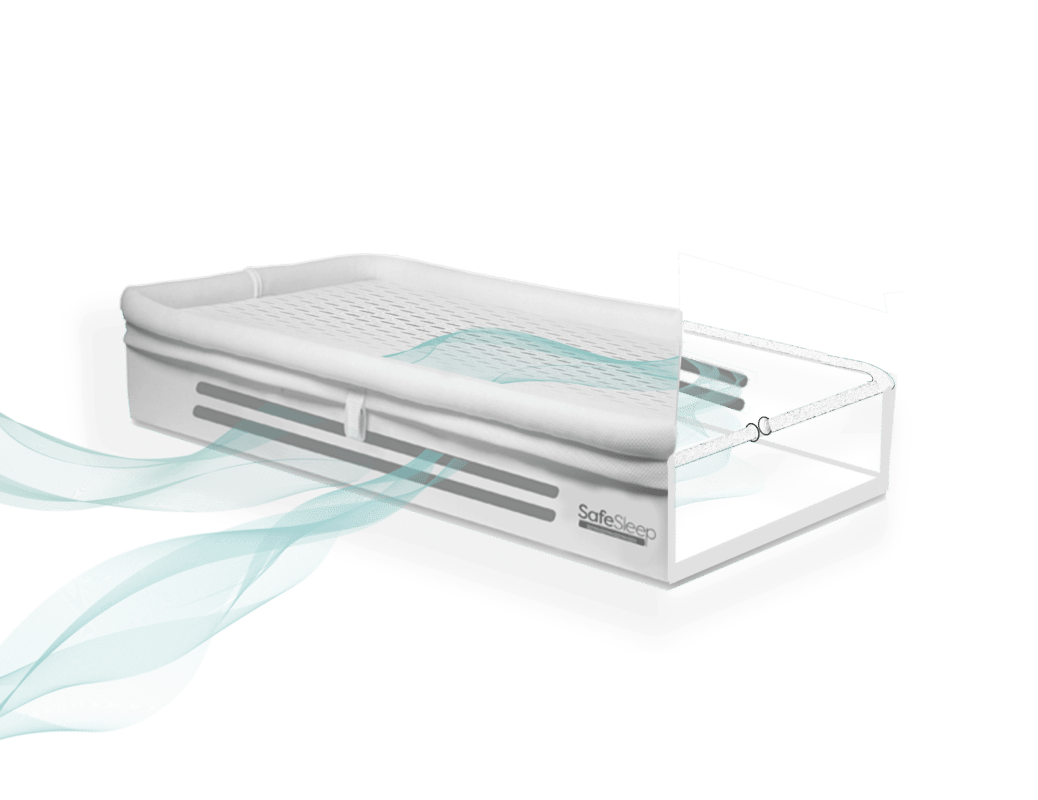 After being affected by the unthinkable when a loved one rolled over in the middle of the night, I found myself needing to find answers.  How do things like this happen to simple, ordinary people?  I began researching the topic with much passion and determination back in the early 80’s.  Through my journey, I have had the pleasure of meeting with and speaking to many safe sleep policy makers, leading research scientists, SIDS experts, SIDS and safe sleep organization leaders, and many families who have endured the unthinkable.

I am proud to say I have been instrumental in advancing safe sleep policies and am considered a content expert on the topic.

Safe Sleep Policies can often be difficult to understand.  Our blog is designed to help parents make sense out of these policies and their importance in your child’s safety.

Today, my knowledge of SIDS and safe infant sleep has earned me the recognition as a “SIDS Content Expert.”  My expertise has been sought to review sleep surfaces involved in infant sleep-related death cases.